Skip to content
Posted on January 29, 2011 by satodayscatholic Posted in Uncategorized 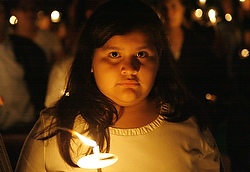 The rate at which Latinos are entering U.S. Catholic life is “sudden and dramatic,” according to the co-author of a recently published book chronicling trends in U.S. religious life.

But, said David Campbell, who co-wrote American Grace: How Religion Divides and Unites Us, it is just one manifestation of a shifting U.S. religious landscape.

“Of those Catholics under 30 who were at Mass last weekend — pick any weekend — but last weekend, 60 percent of them were Latino. Sixty percent. And that group is only going to grow,”Campbell said during a luncheon organized by the Pew Research Center’s Forum on Religion & Public Life.

“Latinos are more likely to remain within the faith; they don’ intermarry as much. They hold onto their young — they also have a higher birthrate. And so those two factors together mean that the Catholic Church is on the leading edge of the Latino-ization of America,” said Campbell, the John Cardinal O’Hara associate professor of political science and founding director of the Rooney Center for the Study of American Democracy at the University of Notre Dame in South Bend, Ind.

“It’s an interesting story because having diverse ethnic groups within the Catholic Church — that’s nothing new. The Catholics have welcomed immigrants from around the world for generations. What’s new is that it used to be the Poles, the Lithuanians, the Italians and the Irish. And now it’s the Guatemalans and the Mexicans, and to see the interplay between those groups is interesting,” Campbell said.

“It means that of all the religious groups in America, the one group that’s most likely to report attending a racially diverse congregation are American Catholics. And even though there are obviously a lot of tensions and it’s not like everything’s smooth sailing, that is itself a remarkable fact and, I think, should be noted,” he added.

American Grace profiles several congregations, including two Catholic parishes in the Archdiocese of Chicago whose ethnic focus has shifted in recent decades from European to Latin American.

The book, which Campbell wrote with Robert Putnam, also goes back a half-century and sometimes longer to examine how Americans’ thoughts about religion changed, “American Grace” is based in part on a Pew survey of roughly 3,000 Americans in both 2006 and 2007.

“You find that Americans in the 1950s said, ‘Yeah, religion has a huge influence in our society.’ But then by the time you hit the ‘60s, that drops off dramatically, and it correlates very tightly with all of these other changes, particularly those related to sexual beliefs and attitudes, and customs and practices in the United States,” Campbell said.

“That’s the shock. But it was followed by two aftershocks,” he noted. The first is that “throughout the 1970s, all the way through the mid-1990s, we see a growth in evangelical Protestantism.”

The second, Campbell said, “consisted of a dramatically increasing percentage of Americans who report, when asked, that they have no religious affiliation.” Tallied at 5 percent a generation ago, that cohort has more than tripled in size to 17 percent, according to the Pew surveys.

Campbell noted the paradoxes in American society’s attitudes about religion, including its political spillover.

“If I know that you are a grace-sayer on a regular basis” — 44 percent in the Pew survey reported saying grace daily or more often, while 46 percent said it only occasionally or never – “I actually know a lot about you,” Campbell added.

As a result, “we have, now, a polarized religious environment in the United States because we’ve seen a growth in conservative religion. That growth has largely stopped and it’s begun to decrease a little bit, but it’s still a sizable fraction of the American population,” he said.

One seeming contradiction among young people, who are least likely to claim denominational affiliations, is that “young people today are actually more likely to be pro-life or at least ambivalent about abortion than are their parents’ generation,” Campbell asserted, adding “there will be an opening for political entrepreneurs to come in and construct a new coalition.”

Still, religious tolerance prevails amid the politics. Jews and Catholics, whom Campbell noted were the most vilified religions in America a century ago, are now “the most popular” religious groups today, based on the Pew surveys.

More than half of all U.S. marriages today are between people of different faiths, he added, more than double that of a century ago, when he noted that the issue of Catholics marrying Protestants looked like strife in Northern Ireland.

This level of tolerance and acceptance even extends into the afterlife, according to the Pew surveys. “Ninety-eight percent of Mormons, 93 percent of Catholics, even 83 percent of evangelicals say, yes, people who are of another faith or good people can go to heaven,” Campbell said in a Catholic News Service report.